Golden Teacher and the Rough Trade shops join forces to offer new ears the opportunity to hear the Teacher’s first three recording efforts on one handy compilation. Recorded between 2012 and 2013 at Glasgow’s Green Door Studio through a state-funded scheme for unemployed young musicians, this release documents the six-piece’s interest in the willful naïveté of late 20th century “post-” tendencies, leading France’s MidiLibre to later describe Golden Teacher as “an idiot-savant prototype of dance music in the 3rd millennium.” What that basically means is Golden Teacher kicks ass! They know what makes people dance and they know how to do it. From the acid go-go of lead off track ‘Rashomon’ you’re in for a total treat that takes in the synth funk of ‘Love Rocket!’, the percussive rumble of ‘Double Bump’, the voodoo drum machine drenched ‘Like A Hawk’ and the atmospheric ‘Dringhouse’ to name but four killer tracks on this amazing set. If you need comparisons think LCD Soundsystem, ESG, Talking Heads, Brian Eno, Pigbag, Trouble Funk, Moroder, DAF and Liquid Liquid. This is the perfect chance to get on point with one of the greatest bands around at the moment and this won’t hang around for long. LP - The LP presents a selection of the band’s favorite tracks from these sessions. 7 Tracks but with the full CD Version included. CD - The CD gathers all material from the three EPs, first released as OM18, OM20 and OM23 on Glasgow’s Optimo Music. 12 Tracks and 60+ minutes of music. 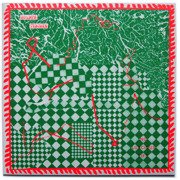