Reissue from one of Japans most highly regarded composers Joe Hisaishi. This is one of Hisaishi's earlier records and one of very few that are made up of solely electronic compositions. Beautiful album - Pink transparant vinyl. TIP !!

Whilst known worldwide for his elegiac scores to Studio Ghibli classics like Princess Mononoke and Spirited Away, it’s a different kind of soundtrack behind Kisshō Tennyo, intended as it was to be a musical accompaniment to an ‘80s manga of the same name.
It’s also a showcase of Hisaishi’s lesser known talents as an electronic musician, shortly before he became composer of choice for world-renowned directors such as Hayao Miyazaki
and Takeshi Kitano.
On Kisshō Tennyo we hear Hisaishi unleash synth arpeggios with all the suspense of a giallo horror. His cold minimalist ambience evokes the likes of Terry Riley. Tracks like 血の抗争 (‘Blood Feud’) meanwhile lighten the mood, running at car chase speed with the bounce of
early YMO. All in all, befittingly beguiling music for the cartoon tale of a modern femme fatale who has the powers of an ancient deity (the eponymous Kisshō Tennyo or ‘吉祥天女’, to use the album’s Japanese title).
In the same spirit of the manga, Lag Records have combined the old with the new on Kisshō Tennyo. Licensed by Tokuma Japan Communications, the original release from classic anime
label Animage comes with new artwork by Luna Monogatari, and a remastering courtesy of Jerome Schmitt at the AirLab. A download card and poster will be included with the gatefold LP which comes on standard black vinyl. 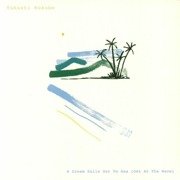