The sun sinks, the sea is turning scarlet. On deck stand two, entwined, a final embrace. The plane is ready for its single passenger. Heartache ascending into the heavens. "Pilotes" is the third release of the 7inch dedicated label No More Pop. By an obscure french synth pop band, Performance, this double pack brings together both rare and unreleased material from the early 80s. The double 7inch features the original version, a dub version, a remake of the song S. 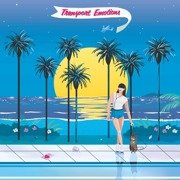