Elizabeth Merrick-Jefferson is one of those artists who seem low-key. There's not a lot of information about her, if any, except for the existence of the first two records and a lone interview. One released in 2013 and the other in 2014. Listening to either record tells you her music might be a lot of things, but low-key isn't one of them. Powerful and colourful, direct, and with 313 references embedded in its DNA, she pulls it off with style. Elizabeth's third record is no exception. It has found its home on our mothership label, Burek. "Three Happiness" is tailor-made for the dance floor. It won't leave anyone with a pulse standing. Playful synths, wonderful strings, and infectious groove make it impossible to ignore. "Knowledge Revolution" is layered and paced, painting a somewhat different picture. Melancholy and a sense of mystery envelop this track, whose leitmotif vocal appears just frequently enough to provide insight into the title. The last track of this EP is fittingly titled "Noctilucent Clouds". It's a drumless track with a rhythmic main synth counterpointed by sounds which give off the impression of clouds shining through the darkness of winter nights. Another amazing release from Burek. 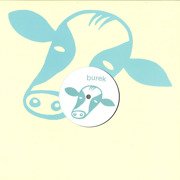