Big digital tunes from the late '90s! Nathan Skyers is among the unsung roots vocalists of the '70s, having recorded for Dennis Brown, Channel 1, Mandingo and others. . In the late '90s he was still making tunes, having just done some songs for Coxsone Dodd. It was at this time that he set up the Family House label as a joint venture with partner Richard Brown. Together they released a handful of singles, among them "Salute to the Heroes", which had a small pressing that came and went quickly. But in the years since this tune has been picked up by connoisseurs as a prime piece of digital roots. DKR finally linked up with Misters Skyers and Brown, and were happy to find some unreleased cuts on the tapes. For the "Salute..." single, there's two vocal cuts, the released mix and another previously unreleased one. 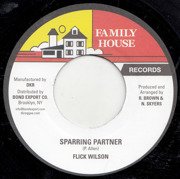