It's been a long time between drinks for John Maus, the former college roommate of Ariel Pink with a fondness for blending baroque "modes" and moody, often lo-fi '80s synth-pop. Screen Memories is the producer's first new album since 2011, and glistens from start to finish. After opening with the grandiose synthesizer soundscapes of "Combine" (think Handel on Fairlights, and you're close), Maus delivers a range of atmospheric instrumental and vocal synth-pop gems dripping with Italo-disco style arpeggio lines, John Carpenter flourishes and decidedly cheap, lo-fi drum machine rhythms. At times, such as on "Teenage Witch", he sounds like "No More Heroes"-era Stranglers jamming with Com Truise, at others - see "Touchdown" - like Gary Numan circa "Cars". It's an intoxicating and entertaining blend. 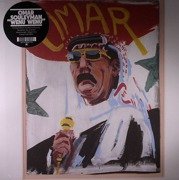