Matt Flanagan has been making music as DeFeKT, ESS and Tinfoil for the past few years, so who better to put out the debut release on First Cut We decided early on that there was no point in repeating his admittedly fine back catalogue, so Matt went off one evening and did a 30-minute live jam on his machines. There was no real plan, but between us, we picked the three best bits, which you now own. Then we had to come up with a name. Initially, we toyed with the idea of calling it 'FeKT' but then decided that only a local audience would appreciate the joke and that it wouldn't travel well. Octal Step then emerged as the clear favourite. We sealed the deal to release 'Toner Head' over a cup of takeaway coffee on a bench in the Stephen's Green Cente in Dublin. And why is Gunter Walraff on the other side of this sheet Well, he seems like a cool guy. Plus he's German and has a moustache - what's there not to like about that. 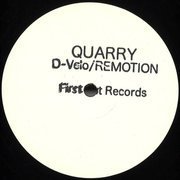