You'd be forgiven for not knowing "Breaking At The Party", the sole single release from NYC outfit Joey Pastrana & His Back of Tricks.
It was originally released in 1984 on the short lived Tropic Of Buddha Records, a label dedicated to Latino takes on electro and disco. Such is the record's obscurity and cult status amongst collectors that you'll struggle to find original copies for sale for less than L500. This City of Dreams reissue presents both of the original mixes ("Vocal" and dub style "Instrumental"), both of which fuse elements of boogie, electro and dub disco in a fabulously eccentric and wonderfully funky way. The synthesizer sounds, in particular, are superb. 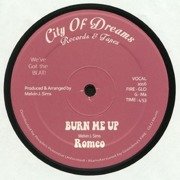