Jonny Soso - True Girl is a nice mellow discoish tune which I recorded with Michael Tomlinson who is an Australian singer, song writer and performer who began his career in indie-rock band Yves Klein Blue. He has shared stages alongside acts such a Franz Ferdinand, The Polyphonic Spree, Justice & The Vines to name just a few.
The past few years Tomlinson has been working on a number of different projects - he's been touring with Klaxons' James Righton in his group Shock Machine (which is made up of members from Metronomy, Friendly Fires and Citizens) as well as throwing himself into the London circuit, playing and writing with any number of groups - most notably with Factory Seconds & Jean K.

The Remix comes from Hifi Sean a DJ, Producer and Songwriter, currently known for his album 'FT', the album boasts collaborations with an extraordinarily diverse range of artists including Yoko Ono, Bootsy Collins, Fred Schneider and more...
'FT' has attracted significant critical praise and broke the top 20 album chart.
Hifi Sean is most famously know as front man of the Scottish band The Soup Dragons, responsible for a series of huge hit singles; 'I'm Free', 'Divine Thing', and 'Mother Universe' in the mid 90's. 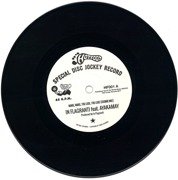