Nothing makes us jump up from the desk, shouting ‘Whaaaaat ?’ like a Bitter End new release ! The label continue to forge a path that’s entirely their own, with another in the limited pre-release series… ‘Kneel B4 Thelma’ on side A, flips one of her biggest hits into an utterly futuristic cyborg-Soul anthem ! Almost as if we’d all forgotten how good one of Earth’s greatest 20th century divas might sound over a filthy 21st century Klanken-banger ! On the flip ‘Mast Song’ transports us to a seaside tavern, where the old folks sit in the back, evoking (and imbibing) strong spirits, with traditional shanty’s while the next generation find communion in the gentle throb of the 4/4 in the tap room next door Light years ahead ! 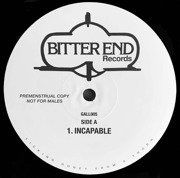