Originally slated for release in 1993 by Super Doppler Communications. It was primitively programed on 8-track sequencer then recorded on a 4-track tape machine in Hani's spare bedroom studio in Denver, Colorado. 26 years later, now Hani's name became internationally known & till this day he continues to produce & remix under many aliases while running his own label Soterios Records. In 2017 Hani started receiving several purchase requests from seekers of this nameless track from Jeep Warehouse Beats Vol:1 on B-side called 'Vector Selector'. During the search for the master DAT, Hani found this extended version now available for the first time on Jeep Warehouse Beats Vol:1.5. Included on the B-side is a track never before released from the same year 1993 that was slated for a single release. We are happy to make both tracks available with some help from Synchrophon in France.
Limited Edition 200 units with Unreleased Veggi Grooves from 90's & Extended Version of Vector Selector. Be quick ! 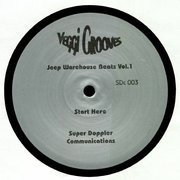