Over the last few years, we've heard plenty of reworks of obscure, Cold War-era cuts from Eastern Europe, though few from the then Soviet Union. The shadowy CCCP Edits series, which here makes its bow, promises to set the record straight. There's plenty to set the pulse racing, from the bubbly acid bass, bustling funk breaks and hip-house breaks of "Malodym" and "Ya Zdes" (the latter with added deep house drowsiness and Balearic intent), to the spoken male vocals, high-tempo electro beats and lo-fi guitars of "Knopochki". Best of all though is closing cut "Astrid", which isn't really Russian at all, but rather an extra-percussive, bass heavy samba-house rework of an old Astrud Gilberto track. We'll forgive them though as it's really rather good. 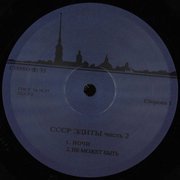