Since launching last year, Barac's Shamandrum label has become a must-check for those who like their club cuts to be psychedelic or mind-altering. He kicks off the imprint's fourth EP by reconstructing Marina Verdi's mesmerising, beat-free vocal cut "Shamanwoman" (track two), brilliantly re-imagining the track as a slowly-building chunk of hallucinatory tech-house laden with wiggly acid bass, hypnotic drums and pulsing electronic motifs. As he has done on all of the label's previous releases, Barac provides an original production of his own on the flip. "Who Says Imagination Isn't Reality" is nominally tech-house, though the track's locked-in electronic rhythm, creepy synthesizer melodies and bubbly acid lines are a world away from bog-standard peak-time "tech". In a word: impressive. 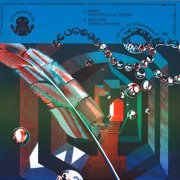