For Let’s Do It Again 2….Ricardo Villalobos delivers his 2nd remix for the label (2 of 5 !) which he’s worked up, alongside studio partner Frank Greiner, into a confoundingly brilliant reworking of Eighties Throwback. Taking Freaks’ original and already twisted sounds and vocals and twisting them up even further into another 14 minute (in it’s edited form) piece of musical genius. Free of compromise and thus fitting the MFF ethos perfectly, the track is a wonderful example of Villalobos wildly experimental dexterity. This is for all those dedicated to their turntable and the love of an awe inspiring journey into sonics and beats. On the flip side you’ll find a record from the other side of the house planet… Boston disco inspired, Soul Clap rework Diz Washington’s vocals on the wonderful Washing Machine to funk them up to within an inch of their beautifully original understated life. Fresh from working with P-Funk orginator, George Clinton, their Washing Machine remix is a crisp, futuristic and downright freaky funkathon which will undoubtedly resonate at clubs and after parties for many moons. And last but not least, an original track from Freaks - originally a remix, Justin and Luke recorded back in the 90’s which never saw the light of day, they removed any references, renamed it Robotic Movement and released it on their album The Beat Diaries. Here they’ve re-mastered the original for vinyl (never having been available before on wax) and are very happy to be able to press up one of the tracks they’ve been most proud of throughout the musical history of Freaks and Music For Freaks. 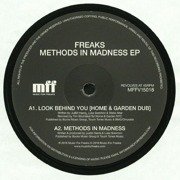