More than a few deep house DJs will be getting a little over-excited at the prospect of this Andres 12" on La Vida. It's the hyped Detroit producer's first outing since last year's tasty Believin' EP, and is as jazzy, positive and floor-friendly as you'd expect. The title track is the epitome of summer deep house, with the producer making great use of samples from an old, piano-heavy jazz-funk number. "Chevy Status" is a groovy, head-nodding, disco-influenced deep house shuffler featuring some familiar old school vocal samples, while "Pluck Away" sees him layer Balearic style acoustic guitars and sweeping string samples over a metronomic house groove. Yep, it's another must-have from Andres. 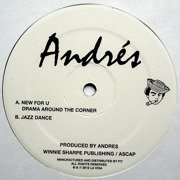