Freshly dressed after a double helping of made to measure goodness, Aficionado size up another summer time smash for the sandal-wearing masses. Keen to capture the coastal cool of the Wirral peninsula, the label crack out the crystals and summon strange-wave sorceress Brenda Ray for another hit of her interplanetary excellence. Wandering from new age haze to celestial rays on this tripped out trio, our genre blending genius takes the fourth world into the fifth dimension of psychedelic sound. Our spiritual journey begins with the chakra cleansing 'Solartude', an out-of-body beauty which bathes us in swirling flute, dreamy chimes and shimmering tape delay before sending us off towards the Orient. Eastern tones and hushed vocals ride a glistening sequence as this flawless fusion of exotica and dub suggests a medicated Martin Denny stumbling out of Chinatown and into a humid mangrove. Next stop on the voyage of self discovery is 'Space Dustin', a lunar lullaby for lucid dreamers which sees Brenda spin Fairlight mallets, celestial keys and whispered vocals into an immersive ode to the outer rim. Floating free of space and time, perhaps you too can glimpse the excellent birds. Over on the flipside and the temperature begins to rise. 'Skip, Hop To Bop' sees Brenda dabbling with dub Techno, setting Basic Channel synths and stirring strings to a skittering rhythm. Dislocated and disoriented we descend into a strange subterranean world of Rothschild parties, Lynchian noir and muffled Techno. Surrounded by swirling voices, shuffling percussion grabs hold of you and all that remains is to sway. Officially Aficionado. 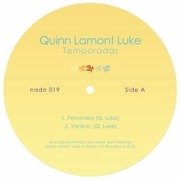