The free will of Struments has led them to concentrate in one 12inch the encyclopedic knowledge of Marc Pinol, a duo of kids that present themselves as T.A.L., and the responsible for all that, Spastor, that appears in a remix signed by Florian Kupfer. Lliure Albir sounds as if Pinol was dazzled by the light of a lantern in a chill out while Paranoid London resound in the next room. In his remix, Palms Trax bet on tom toms and certain tribal groove, adding soft eighties keyboards, deep atmosphere, speeches and dub deliriums that perfectly fit in the freak universe of Pinol. Florian Kupfer remix made of Spastor's Death In La Paz: a hit made in the German musician style whose groove is created by a fold in the sound and the apparent imbalance it has with the bass drum. If after this dawn breaks, it will not be small thing. T.A.L. are guided by a retro-spatial pulse to open a fan of sounds that expands and contracts threateningly, and delicately form what looks like an EBM hit stripped of the hammers. 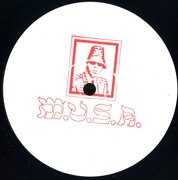