Paul Hester created his cult Moon Music label in 1997 as a portal for his own productions and sounds. The label was short-lived, with only 3 releases in it's catalogue, all produced by Hester himself. Those few releases on Moon are now highly sought after among House and Techno aficionados who are forever seeking that deeper groove. The interesting part of this story, beyond the amazing music that was released, is that there are many other tracks that never saw the light of the day, thus leaving the full Moon story untold. 'Millennium / Days Gone By' from 1999 is the second Moon Music release and is comprised of 2 cuts that boast Hester's idiosyncratic production hallmarks - slick, glacial, minimal electronic Funk. A-side 'Millennium' is a driving, chopped up groove that just swings in the best possible way. It's taut, with creeping synth sounds that gradually build into a soaring, synth fuelled bliss and vocal snatches. The music is definitely from machines, but it has a human heart for sure. 'Days Gone By' mines a deeper furrow, a subtle, shuffling late night groove with a repeated vocal mantra speaking of 'a new generation'. Again, the beauty of this track is the minimal quality, very few sparse elements but arranged with such soul and care it's hard not to get swept away in the waves of pads that continually roll. Few artists can attain this effect within their music but Paul Hester managed to pull it off wonderfully on the cusp of the new millennium. An absolutely essential release from a gem of a label that remains criminally underrated. Moon Music releases tend to attain high prices on the second hand scene and are often extremely tough to track down due to their limited original releases, now, thanks to Paul, they are thankfully back on the streets, fully and lovingly remastered from the original DAT tapes for our pleasure. 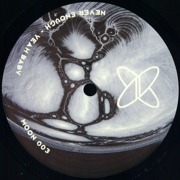