The happiness is back! After his debut in Future Times, Repetentes 2008 checks the third 40% Foda/Maneirissimo 12'' release as "Os Maneiros", an EP showcasing the sound that only the fail experiences of Gabriel Guerra's school years could bring. With his trademark sound of sped-up boogie and happy-as-hamtaro fusion, Repetentes 2008 packs it up four crazy tracks that are perfect for bringing up your mood. "Lucas Freire Birthday" it's that crazy instant hit accompanied by a chit-chat between two friends (Lufreire and Timidozinho) who doesn't seem to get along but love each other. Supervagabundo is flute-filled fusionness with conventions and solos that could make even Casiopea get jealous. In the B-side, "Nova Berserker" gives you the chill in a YMO-esque fashion by showing how things works when it get's the glassy and digital synth fever and "Fofo Shuffle" closes with the cute triplet groove and a beautiful and bubbly melody. Are you suffering from po-faced music in the dance floor No problem, Repetentes 2008's "Os Maneiros" is the cure, the sugar that you gives you the rush without losing the joy! GET IT NOW! 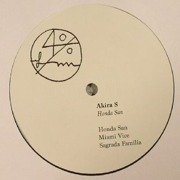