Re-issue of forgotten minimal techno abstraction from Hamilton, Ontario. The unsung genius of Secret Werewolf is fully on display on this 1996 gem.
Rubbery and polymetric, akin in mood to Robert Hood/Metroplex productions of the same era, but full of eerie metallic timbres and flexing grooves which combine into a lysergic hypnosis unlike anything else from then or now.
A taste of the forthcoming Geej re-issue project surveying the Steel City Records catalogue, a wellspring of unsung, singular dance music that arose from the abandoned industrial spaces and uncompromising producers of the fertile but secluded techno zone of Hamilton, Ontario Canada circa 1995-1997.

First time pressed in over 20 years, vinyl only. 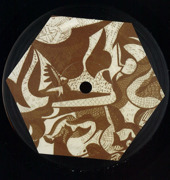