The rising London based label is quickly defining his own and unique sound laying down the law with another live jam recorded 4 tracks release by his own boss DOTHEDU.Following the success of the first release, Senseverse Records has came back with Lost Acids EP, a rough lost minded trip with an unusual sense of refinement. The producer lets the trip's curtain rise with Lost Acids which takes us to a gloomy hidden place on the edge of the house and techno roots with a banging 909 and crescendo 303 which dives smoothly into the background own producer's voice, Colombine Acids explores the happier stage of the trip and keeps the sound on the thin line in between the 2 genres with his fat kick and the flying and clashing crashes.
The B1 throws us right back deep into the dark with a slowed down and mentally twisted remix by the very well known producer Florian Kupfer. Finally Early Acids rings down the curtain's trip with some fine classic house music sonorities that lead us to a dreamy and dancy closing. 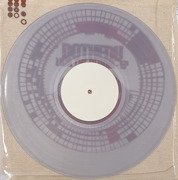