What’s Amore? Amore is a lifestyle, it’s a feeling, it’s an attitude. Amore is cruising down sunset boulevard in a pink Cadillac. Amore is drinking Long Island ice tea at

This record was released shortly before RSD 2019.

A is an edit of "Soul Kitchen" by The Doors 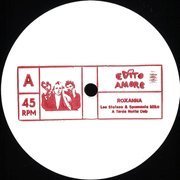