After CV’s double Special Delivery LP released in 2018, Edit Service is back with its fifth release, an EP of edits by the young Moscovite duo known as Ólta Karawane, noticed for their edits on Maturre and Discos Capablanca. We’ve been playing their edits very often lately, so it seemed natural to release them on Edit Service. a1 - les portrait le diacre astvatsatour sarkissian Opening the EP is this early 80’s antipodean cut somewhere between new wave and post-punk where a shopping list is recited by a male and a female voice engaged in call and response. Innocent and catchy on the surface with its electric keyboard, primitive drum machine and bass guitar, it seems there is something perverse lurking within this tune.

a2 - folle vendredi soir On this cut, Ólta Karawane take an obscure guitar-driven Italian tune from the early 80s with coolly detached vocals that are closer to New York’s phlegmatic post-punk than Rimini’s exuberant italo. Extending the tune and reinforcing the dance-inducing rhythmic section, the Russian duo’s edit is a groovy affair.

a3 - farine The original was a late 80’s hit by an Austrian pop band, with a bassline not far from that of a seminal italo-german hi-nrg hit. This mid tempo edit strips it down to its bare essentials, synth arpeggios, 808 programming, and various bits and bobs. Extended, it’s a catchy and compelling cut.

b1 - oinj Here Ólta Karawane take a dissonant art rock tune from a British producer and focus on underlining the track’s intricate melodic and subtle but danceable rhythmic arrangements. There is a playful and slightly mysterious Eastern feel on this edit fit for hash dens.

b2 - racaille Closing the EP is an edit of a highly-influential Swiss producer. The original was released in the mid-80’s and has proto-trance written all over it. By slowing it down and extending it, Ólta Karawane highlight the warm and bittersweet analog synth arpeggio at the track’s core and make the electro beat driving the tune even more spacious. 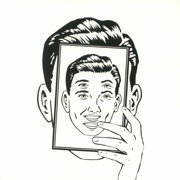