"Gaijin Blues are continuing to go from strength to strength with their production and dancefloor rhythmical approach!" – Jay Scarlett (Puls Radio, Sounds Supreme)

Gaijin Blues II takes you a step further. With this LP the band have created their own fictional JRPG, an end to end narrative with the music weaved around it all. Even the back cover is a homage to a classic video game magazine, designed by Tom Miller in the style of a walkthrough of the "game", detailing how to get through each chapter/track.

In the words of the creators themselves: “This is a sequel to a story you’ve never experienced. You are the protagonist who is coming back home to see his world completely changed by seemingly harmless technology. Each track is a chapter in this tale. Collect the items, gather a party and use your wit and imagination to find out the truth. Because technology usually comes at a price…”

This about as conceptual as it gets: where a brand new story matched with an audio narrative meet together in a fictional world. In terms of electronic music that doesn’t happen often. Gaijin Blues II is a truly unique record whether you’ve ever owned a console or not.

Gaijin Blues’s live performance mixes MPC’s, drum machines and synths with loopers, live flutes and percussion. They have caught the attention of some of the UK’s biggest names in electronic music. They’ve opened for Anchorsong and were hand-picked by Romare to support him at London’s Jazz Cafe. In November 2019 they’ll be opening for Actress and Amon Tobin.

Written, produced and performed by Paweł Klimczak and Michał Szczepaniec 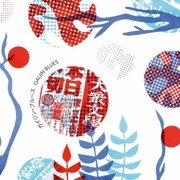