Sharif Laffrey is something of an unheralded hero of the underground Detroit scene. Active since the halcyon days of the early-90s Motor City rave movement, his sporadic releases are rarely less than superb. Sharif Laffrey has been playing records and making music for over 20 years. Born in Detroit, Michigan - he's worked on the line checking camshafts for Chryslers & as an operative for Underground Resistance (UR) at Submerge for Mike Banks, at the same time. Currently releasing music on his own label SPECIAL FORCES.
Championed by DJ Harvey, Carl Craig, Dixon, Andrew Weatherall, Ivan Smagghe, Seth Troxler, The Juan Maclean, Optimo, Trevor Jackson, Hunee, Manfredas, Solar, The Chemical Brothers…

"SOUNDS TO COME" - Is the 2nd release on Laffrey's own label SPECIAL FORCES
following its successful debut release "AND DANCE".

'Sounds To Come' is a long trip of low "techno" with a brute baseline and mesmeric vocals - when turning directly into The Golden Hour of a late night / morning is the thing to do.

"Rhyth-matic traditions that have become oblivious to our modus operandi.…
welcome to awesome…..the sound of sounds to come" 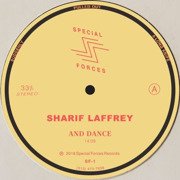