Taken from a mysterious Acetate cut by Derrick May in 1987 this release was originally penned for KMS offshoot Pheerce Citi.

Both these sides were later released - 'The Darkside' = as 'A Relic' (by Longer Than Long ago) and 'Tic Tic Tic' was later released on the limited edition compilation as Music Institute 20th Anniversary as 'Untitled'.

Both tracks are however, very hard to get on vinyl and have now been re issued as loud 45rpm pressings in Pheerce Citi artwork and remastered for 2014.

300 copies of this release were released in different artwork at Phonica Records as part of RSD 2014 which sold out in a week... 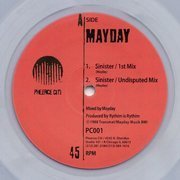