A focal point for the unique punk-funk that was coming together in Bristol as the bridge from the 70s to the 80s arrived, Maximum Joy was formed by Glaxo Babies multi-instrumentalist Tony Wrafter and 18 year old vocalist Janine Rainforth. Soon they drafted in additional Glaxo Babies in the form of drummer Charlie Llewellin and bassist Dan Catsis, along with guitarist John Waddington, fresh from The Pop Group. The group set about making a one-of-a-kind mix of funk, punk, pop, jazz, dub, soul, afrobeat and reggae; creating a brilliant burst of danceable tunes wrapped around elastic basslines and complex percussion, punctuated by melodic horns and stabs of guitar, all of it highlighting Rainforth’s naturally enthusiastic vocal style. They immediately took their place on the rosters of influential labels like Y and 99 with iconic debut single Stretch, as the band had clearly captured something special.

Entering 1982, Kevin Evans had replaced Catsis as Maximum Joy set out to make what would be their only full length LP. Recording at Berry Street and The Lodge with producers Adrian Sherwood (On-U-Sound legend), Dave Hunt (Flying Lizards, Pigbag, This Heat) and Pete Wooliscroft (Kate Bush, Talk Talk, Peter Gabriel, OMD, This Heat) the band would mix practiced grooves with imaginative improvisation. The results were absolutely jaw-dropping.

Station M.X.J.Y. kicks things off with Dancing On My Boomerangand promptly sets forth the blueprint for bands like !!! and The Rapture to capitalize on nearly twenty years later. In fact, those bands can only dream of the mix of driving percussion and spectral shards of guitar that Maximum Joy has clearly already mastered. Do It Todayannounces itself immediately with Rainforth delivering a looping and infectious vocal melody that the others dance around playfully, as handclaps keep the stomping groove intact, leaving a dancehall hit for outer space circling your turntable.

If you ever wondered what it would sound like if ESG and The Slits combined forces, Let It Take You There has the answer for you. Llewellin periodically delivers a cascade of marching band percussion while Waddington’s classic R&B riffs are transformed into a slithering snake trying to keep pace with Evans locked in groove as Rainforth’s singsong vocals are reduced to whispered echoes. They close out side one with the delicious slab of pop that is Searching For A Feeling. Clearly pronouncing the band’s intention to find the positives in a dire time for England, they look to rally those around them to focus on making real change in the face of opposing voices via one of Rainforth’s most delightful deliveries.

Side two sees Wrafter stretching out on Where’s Deke?, showcasing what had already been obvious, as he is the band’s secret weapon, often coloring each tune with his horns, sometimes in several styles just seconds apart. He underlines that feeling with the raucous and bouncy Temple Bomb Twist, before they hit a straight groove in Mouse An’ Me, like a dub infected Train In Vain. Well, if The Clash had ever allowed themselves to properly lose their minds on the dancefloor.

A funky afrobeat flute and guitar battle breaks out (way cooler than it sounds) before Rainforth rallies the troops to not only fill up the disco, but also the surrounding streets in political resistance to Thatcherism via All Wrapped Up. It is entirely genuine and their activism has none of the menace of the others in their scene, but rather a feeling of sharp optimism amongst this danceable masterpiece. It is that optimism that always set Maximum Joy apart, and makes their grooves all the more irresistible today.

Sadly, the upward trajectory of the band was cut short as Rainforth left the group, and soon afterwards seemed to stop making music altogether. The reasoning seemed destined to remain a mystery, until earlier this year when she gave a brave interview to The Guardian where she revealed that an assault by someone in the industry caused her to retreat entirely from music for nearly three decades. Luckily, Janine has embraced music once again, and she refuses to let the magic that was Station M.X.J.Y. be lost as well. 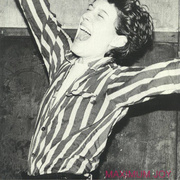