This time, it’s more like a record for yellow press readers – due to the high celebrity density on the two tracks! First, there’s Richard Fearless. The guy has been on the “Mission Impossible” soundtrack and he was famous in New York and London as DEATH IN VEGAS. He composed the music on this record and recorded it together with the slackers of Circuit Diagram, which is why the project was aptly named DEATH CIRCUIT. That’s logical, that’s correct, excellent!

One track of theirs is called “Strom Dub”, and the full length of it has been pressed onto the A-Side of the record. It sounds like Synthesizer music usually sounds: Sexy and warm and cold. The tears of technology dripping onto your head for eight and a half minutes while the spirit of the 80s sneaks in through the back door.

Like the B-Side, this track is a grower, a slow creeper you’ll want to hear again and again. Ac-cording to science, this is just what the people need in these days of unhealthy acceleration. And yes, the B-Side: There’s the track “Teeparty am Waldbrand” which translates to “Tea Party at the Forest Fire”, and it features the fat-mouthed DAS BO and RALF KÖSTER. Trust us, it’s just as hard for native speakers to decipher what they’re saying, but we were assured there’s even a “political dimension” to the track, so I guess we’ll have to listen again. Soundwise it’s a beautifully clut-tered mess, a cold wave sprinkled with bizarre brittle that lures you out into nature.

Ah yes, Pudel Produkte – it’s still minority music from the planet of the apes for people that know where to go, and that is elsewhere than the others. 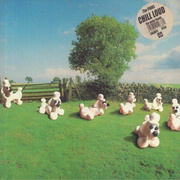