Traditionally the liner notes of an album take on a kind of third-party address, where a writer is delivering their thoughts about how an album makes them feel without breaching that space where they are representing themselves or the moment in time directly to the reader. The goal is typically a kind of timelessness, but as we live in unprecedented times, unconventional methods take on new life, and hopefully importance. In the spirit of that idea... man, is this the kind of album we all need right now. So many of us feel like we're constantly walking a tightrope, are feeling like we can't unwind, are in genuine need of a few moments of respite. Every so often an album emerges from an artist that most likely did not realize when they were composing how timely the results would be, and Lofi Dimensions is exactly that kind of record. It doesn't really matter why it's coming when it is, what's important is that it's here, offering peace to the perturbed and inspiration for the downcast. The American Dollar have long been one of those artists operating in a kind of middle ground, a band with a long history of creating moving instrumental rock that has somehow avoided ever becoming synonymous with modern American post-rock acts. They retain a sort of autonomy in a valued position just outside the boundaries of classification. Blending electronic textures with moving guitar and keyboard melodies, their music has always traveled somewhere in the spaces between trip-hop, electronic, post-rock and ambient, and this inability to be defined is ultimately what sets them apart from the trappings of genre, allowing them to be whatever they want The American Dollar to be in a given moment, always on their terms. 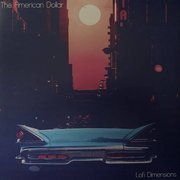