Cormac is launching a new record label called Polari, through which he will curate and share music from artists that he champions in his much-revered DJ sets.

The name "Polari" references the slang used by the gay subculture in the 19th century.

The inaugural release is from London based Kiwi - a producer, label owner and promoter very much on the rise.

Having previously released on revered imprints such as Optimo, Future Boogie, Needwant, 17 Steps and his own Crossbreed, Kiwi has already established himself a producer with idiosyncratic studio nous, and a natural flair for delivering records that bind and enthral dancers of all persuasions.

Crossbreed is also a London based event series that "encourages freedom of expression and hedonism", and aims to "break down social constructs and stigmas". It is here that Cormac and Kiwi reconnected earlier this year, and sowed the seeds for this first release.

Artwork on this release is from SHREK 666; an Artist, Performer, Maker & DJ also known as Sorcha Clelland. Creator of Ministry of Pound, a Glasgow based Fetish Party & Mag and resident performer at Scotland's most loved Queer party Shoot Your Shot. Combining monstrosity, trans*ness & hypersexuality through the embodiment of an ogre creating new queer worlds. 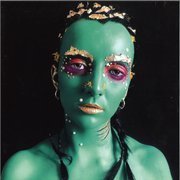