Cormac is pleased to announce the second release on his new record label Polari, the label he curates and through which he shares music from artists that he champions in his muchrevered DJ sets. The name “Polari” references the slang used by the gay subculture in the 19th century. The sophomore release is from Philadelphia based duo Zillas on Acid. 2019 was the year Zillas made the transition from DJs to break-out producers. Having honed their DJ skills at Philadelphia’s revered MAKING TIME clubbing institution, Thomas Roland and James Weissinger have released two EPs on Optimo Music and also on Ivan Smagghe’s Les Disques de la Mort in the past 12 months. Cormac has also opted to showcase different LGBTQI+ visual artists' work for the sleeve art. Artwork on this release is from SHREK 666; an Artist, Performer, Maker & DJ also known as Sorcha Clelland. Creator of Ministry of Pound, a Glasgow based Fetish Party & Mag and resident performer at Scotland’s most loved Queer party Shoot Your Shot. Combining monstrosity, trans*ness & hypersexuality through the embodiment of an ogre creating new queer worlds. 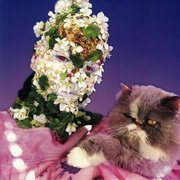