Long awaited vinyl reissue of NWWs classic 3rd album. This blue vinyl version. Is exclusive to Cargo. Packaged in an outer sleeve that replicates the original United Dairies issue and has a brand-new Steven Stapleton designed full colour insert. Info: ollowing disagreements amongst the founding NWW trio over To the Quiet Men from a Tiny Girl, Steven Stapleton returned to the studio without Heman Pathak or John Fothergill to create something that more closely fulfilled his vision of what Nurse With Wound should be. The results are often cited as the first great NWW album, with Rolf Semprebon at Allmusic stating that it constitutes "the first fully realized NWW record....a far more mature effort than its predecessors, much more focused and sounding less like some stoned guys goofing off in the studio". There is a more extensive use of tape editing and audio collage on Merzbild Schwet than was found on the preceding releases, a strategy that would become Stapleton's signature sound on the albums that followed. There is also the overt use of humour; the sound of a repeated loud vinyl pop being included at the beginning of "Futurismo", initially creating the impression that the record is in some way damaged, accelerates to such a speed that it becomes obvious that it is part of the composition (the impact of this device losing relevance on subsequent cassette and CD editions). 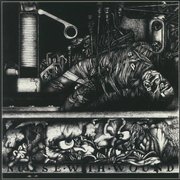 To The Quiet Men From A Tiny Girl (yellow vinyl)