Following up that last one in April which featured 'Strange World' & 'Purple Desire', When Doves Cry are back with their third release and it's said to be by two well known DJs on the scene - who wish to remain under the radar. As the name may well suggest, we have a perfectly pitched down R'n'B number that many will be familiar with called 'I Wanna Be 5 Semitones Down', which comes with a handy instrumental edit over on the flip. Through dewy pads and echoing percs, they concoct a late night anthem for the club and the bedroom. 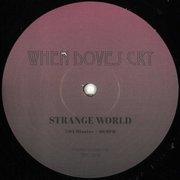