Nicolas Duque is a producer whose playful take on UK Garage, House & UK rave sounds is attracting ears far beyond his native Colombia. After an appearance on the Breaks 'N' Pieces Vol.2 VA, the Bogota producer makes his full release debut on the label.

The release opens with UK To G, an unpredictable but alluring tribute to the spectrum of sounds across the hardcore continuum. If Just The Way is a sweet UKG song for the lovers on the edge of the dancefloor, then Moshpit Rave is it’s breakbeat-lined alternative for the
couples in the middle of the rave. This romantic thread is amplified on the B-side with 2You, a sugary-sweet R&B flip. Bristol Love, with its whompy bassline & tightly-chopped breaks are an ode to the soundsystem city & Holloway’s remix ramps up the dread with a menacing reese bassline. 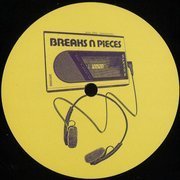