Freddy Fresh is a legend. Period. From a plethora of 12“es on labels like Nu Groove, Drop Bass Network, Forced Nostalgia, Spaziotempo, Lone Romantic or Toolbox Killers to albums on 90s scene mainstays like Harthouse, Anodyne or Eye Q to countless releases on his own imprints like Howlin Records, Analog Records USA and Electric Music Foundation. From remixes for the likes of GusGus, Heaven 17, Kitachi, Steve Stoll, Frankie Bones and many more to hitting the UK Top 40 with the massive BigBeat smasher „Badder Badder Schwing“produced alongside Fatboy Slim. The man has done it all. Nearly.
And therefore Intrauterin Recordings is proud to present the first ever Drum'n'Bass release in the more than 30 year spanning career of the one and only Freddy Fresh!
With „333“ Freddy Fresh is going down a twisted, hard stepping and yet positive alley of what the man himself refers to as Modular Drum'n'Bass that is unmistakably cooked up live and direct in his Minneapolis-based studio. Expect a whirlwind of swirls, swooshes, bleeps and FX alongside raw junglistic beats and the most positive Synth bass motif you've heard in a long while.
Yet the singles' main dancefloor smash is to be found on the flip side. „Watch It Go Roun Roun“ is a raw classic, a heavy original JumpUp banger driven by a killer vocal performance by Mike Gates a.k.a. Mikey Dredd. Likely better known to many for his Techno productions on labels like Kanzleramt, Creation Rebel or Howlin Records rather than for his MC skills this is the very first time Mikey Dredd's secret love for taking up the microphone as a proper Jungle / Drum'n'Bass MC is officially recognized and revealed on wax as a late tribute to and
honoration of a large scale talent which passed away way too soon in 2019. Lighter crew!
Initial pressing will be limited to 225 copies on 7“ whitelabel vinyl. Hand-stamped with stickered cover. 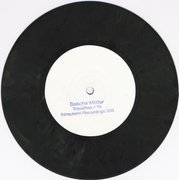