Those Kennedy Road Blues are a studio based band from Lublin, born out of frustration by singer, guitarist and composer, Mark White.
The album is a mixture of Blues-Funk-Indie & Rock.
It was recorded in the now defunct studio, Redline.

Watch out for an EP to appear on wax, due in late spring.

The squad for the job of creating this album:

Mickey Zetena - beats on the pads

Noon - mastered by, for "Nowe Nagrania"

If we, as humans, can't live side by side now - what happens in 23 century when other life forms will come here searching for jobs? 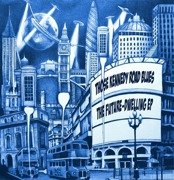