William has been an intriguing presence in Sydney’s music scene for over ten years, performing and releasing under several monikers including most recently, T.Morimoto. As a producer and teacher he has inspired the work of artists such as Seekae, Cliques and Cassius Select. His EP Annum Contra is a diverse collection of percussive approaches and rhythmic studies that sees William moving in a dance floor friendly direction - whilst maintaining the idiosyncratic style he is known for. Annum Contra also features a handful of guests including Lamtech9 and Kid Kairo. Both regularly attend Lion Mountain Studio, a community recording space for young people from Sydney’s Sierra Leonian community where William volunteers. Chun Yin (aka Rainbow Chan) also makes an appearance providing her vocal touches. The first track, “Tuition", reflects William’s interest in stretching clichés and testing aesthetic standards: “I like the idea of building something around a really stock emotional fragment - how far can you go with just a minor triad, or a straight arpeggio, or a few tuned drum sounds? Can you undercut and reclaim musical clichés?” “Busss” is a percussive jam built around Lamtech9’s entirely improvised verse. “Rue Vavin” is an intense polyrhythmic experiment drawing on footwork kick patterns and live percussion all recorded in William’s studio. “Sleepwalk” is an expansive and driving four-to-the-floor tune. Plastic World is excited to present Annum Contra to DJs and listeners alike. 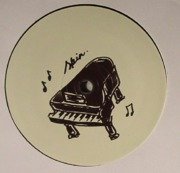