Let's face it, summer in New York City is sweltering. Even with all the windows open and fans on high, it is hard to find refuge in Alliance Upholstery's Chinatown offices. Today's sweat though, is due to the Dancer on the Shore' EP, the latest release by the Brooklyn based band, Lemonade (Cascine/True Panther Sounds). Dancer' is a subdued summertime collage of steel drums, buoyant electronic pads and windswept vocals. Joined by Dee Dee from Dum Dum Girls, it is a celebration of the space where humans and nature exist in harmony. Originally released digitally as a single on Cascine in 2015, the band created a DJ friendly extended mix for this release. If you have been to the Air A Dancer' party over the last few seasons, you have likely already heard it (sometimes twice in one night!). If that wasn't enough to pique your interest, the remixes put this one over the top. First, the Jex Opolis (Good Timin'/Running Back) Dub picks it up in his Cutlass Supreme (look at his Kingdom, look at his car) with a full day of activities planned. Top down, wind in your hair, cooler full of ice, spf a million, this is Eddie Grant approved dub at beach. Think California Style in Long Island. After sundown, the Whatever/Whatever (Justin Strauss and Bryan Mette) mix builds a bonfire in the dunes. Hard hitting drums and soaring synths make this mix perfect for dancing all night and howling at the moon. As the night gives way to morning, Jex's vocal remix wipes the sand off your feet, finds your lost t-shirt, and gets you ready for new day.Keep this one in your bag all summer. If you can't make it out to the Rockaways, this is about as close as you can get. 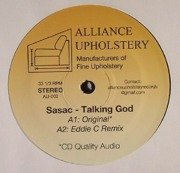