Stop what you're doing right now, you've just found that record that stays with you all summer. The record to soundtrack the BBQ, to gently raise the energy on a hazy evening, to baffle the midnight marauders into dancefloor destruction, to give the early morning ravers that extra kick. That 'one more song'.
WotNot have spent the last two years on a mission to prove that intelligent music can be footloose and fun. This release marks a milestone in this mission, with possibly the most complex bass line to ever stick in your head, from a man whose every DJ set serves as an education as much as a liberation. A man with a hunger for new records that has seen him included as a featured Bandcamp fan alongside the likes of Gilles Peterson.
K15 is known to many musical worlds; a go-to on the UK soul/jazz circuit, with production on Belle's Lapwing EP, and DJ sets supporting the likes of Bilal and Marsha Ambrosius; a figure on the beat scene with his hypnotic instrumental tapes; and spinner of infectious dancefloor oddities old and new across London. This EP presents yet another facet, the soulful, jazz-inflected house that has had man-of-the moment Kyle Hall all ashiver.
Bordeaux has all the sophistication the name implies, a delicious bubbling bass line with subtle notes of garage and building layers of improvisation providing an earthy jazz undertone. Broken beat legend Kaidi Tatham builds on the chord progression in his soul-laden rework, with light-footed percussion adding brightness to his famously refined palette. House rising stars Glenn Astro & IMYRMIND add body to the original in their rejig, fierce swinging house with sermon-like vocal cuts raising the potency to a powerful climax.
B side Hall Of Memories brings its own bubble; simmering, expectant synth textures rising and falling over an evolving bass hook. A perfect summer set opener or closer.
This EP represents the all-encompassing but distinctive flavours that K15 has made his reputation as a DJ on. And how exciting to see him take the first step in another of many directions, with great leaps certain to come. 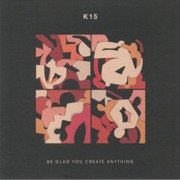 Be Glad You Create Anything