'CHREAL01' is the debut project by Scottish producer Chaotic Reality exploring a meditative side to techno. Written over the course of several months spent living in New York as a resistance to the frenetic pace of a busy environment, 'CHREAL01' contains four tracks that repeat, oscillate and soundtrack a more centred existence.

Inspired by Shinichi Atobe, Avalon Emerson, Newworldaquarium / Ross154 & The 7th Plain. Each track in this self-released record is named after its sequence and operates on a slower tempo, focussing on melody and sound design, with aim to investigate the space between dub techno and early trance.

Track 'One' opens with gentle dancing chords developing over 7 minutes, with subtle nods to Echospace and Black Dog's 'Otaku' over a punchy kick and warm sub. Reverb-licked stabs pass softly in and out the mix and ride over a homogenous chord range, highlighting points in the melody and meandering back into the ether. 'Two' has an introspective focus, rarely reaching more than two kicks per four bars. An arpeggiated lead centres the composition, slowly developing over a thick bassline. Distant snaps and pops season the track and highlight the empty breathing space intentionally left in the production. On the B-Side, 'Three' is characterised by heavily saturated kicks softly thumping under a bubbling melody, broken by echo-delayed stabs varying in form, filter depth and feedback timing. On the closing song 'Four', Chaotic Reality develops and sculpts a stack of delayed chords creating a progressively elevating soundscape. The lead melody chords layer and discord - changing thickness, shape and form throughout - with pseudo kicks acting as a complimentary melody. Here, CR plays with space to creating a hypnotic spacial production akin to Digital Justice or The Orb, with the intention to take the listener to a transcendental state. 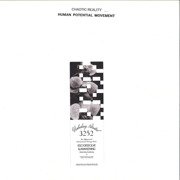