Enjoy 3 guys jamming 3 tracks together as Lemonade’s 3rd release, played on 33rpm. For almost a year now, our main man serving the drinks Arno Lemons has been relocated from Antwerp to Berlin, where he lives and works for OYE Records. After a few months of wack adventures into the rich culture of Berlin’s nightlife, Arno got around, made friends and was introduced to some very magical hombres … For the next release on his Lemonade imprint, we have to go to a mythical place called Darmstadt. Darmstadt is a city in Germany, literally translated from Belgian-Flemish slang to English as “Drunk city’. According to Mr. Lemons, it would’ve been impossible to not have great stories made there. And gladly enough, he was right; the city is sleazy & jazzy as hell, baby. After the Jazz-storm hit Los Angeles, USA, and bursted into (South) London, UK, it has now struck Germany, right in this little, mysteriously interesting city, in the southern part of the Rhine-Main area. Meet Triorität: a mesmerising threesome co-responsible for this fresh movement in D-town. With Gerrit Ebeling on keys and synths, Grégoire Pignède on bass and Alexander Hoffmann on drums, you have no idea where you’ll end up. With amazing self-composed, long duration tracks full of moodswings and jams, it knows how to surprise and catch you with its uplifting drums, dancing tones and dreamy melodies. The trio started with Gerrit and Alex, who grew up in a musical environment. As cousins they started jamming on their fathers’ drumkit and keyboard since they were little. In 2012, they met their third companion Grégoire at a party, drinking really bad Gin Fizz out of a plastic bottle. After this life changing moment, Grégoire joined the duo, which reformed itself into a musical threesome full of crazy adventures. With deep influences from the 70s fusion and disco scene, as well as modern electronic genres like Hip Hop and House, Triorität pursues to push a fresh and new sound which will represent .. 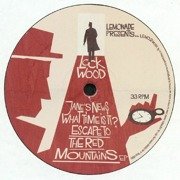 Escape To The Red Mountains EP / Who The Fuck Is Cup Of Tea?