Following successful projects such as Metropolitan Jazz Affair, The Dynamics and Mr. President, Bruno 'Patchworks' Hovart originally released the Uptown Funk Empire's album in 2009. Now sold-out for quite a while and still on demand, The Empire Strikes Back is finally reissued. Bruno Hovart, as a self-taught musician and typical teenager, started playing guitar, bass and keyboards at age 15, covering James Brown, Jimi Hendrix and Cream in his bedroom and, later in college bands. His first releases are in the mid-90s, with deep-house and disco live bands and various electronic projects. He quickly develops and shows very special skills for vintage Disco/Funk productions with a contemporary flavor. This gifted boy's been working with artists such as Amp Fiddler, Archie Shepp, Mr Day, Paul Randolph... and for many recording labels such as I Still Music (US), Favorite Recordings (FR), Infracom (DE), Further Out (UK)... Uptown Funk Empire is an exciting and ambitious project, worthy of its name. It's like being back to the better days of Funk without a travel machine... the vibe is vintage but the sound is fresh... This album is huge and it covers all styles of the Groove music golden age: Boogaloo, Soul, Disco, Boogie, Funk... With brilliant vocal by silky Juan Rozoff, Brit-Soul legend Noel McKoy at his best, high-voltage divas Ange & Janice... and Bruno himself on the mic... it's pure funkiness! Beware, The Empire Strikes Back and is kicking... so get up & dance! 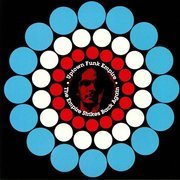 The Empire Strikes Back Again