The latest release on Raresh's Metereze label comes courtesy of Ionut Arapu, a Romanian scene stalwart whose minimalist techno releases are rarely less than rock solid. Between them, Arapu and Raresh apparently decided to call the EP "Anthology" due to the eclectic nature of the four tracks on show. It certainly ticks a lot of boxes for us, with the warm, loose, bass-heavy and spacey "Committed" being followed by the more sparse and unusual "Wave Hat", where mind-altering electronics and ghostly chords drift around an off-kilter groove. Turn to the B-side for "Modular Jam", a warm chunk of analogue tech-house hypnotism, and the groove-based antics of fittingly titled closing cut "Shuffle". 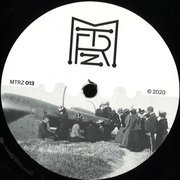