On July 26th the top-ranking leftfield star Clark will release ‘Kiri Variations’, via his own label Throttle Records – and as always, he has musically metamorphosized into something fresh and new.

‘Forebode Knocker’ is darkly funky, like the kind of lost diggers’ nugget unearthed and sampled by RZA, whilst the sonically-perfect ‘Primary Pluck’ unfurls exquisitely, swaying slowly ever forward like a funeral march.

‘Cannibal Homecoming’ is nothing short of Clark’s most song-based composition ever, featuring augmented human voice as evident elsewhere and also a fully-fledged vocal sung by him.

‘Kiri Variations’ started life as the score to the BAFTA-nominated TV program ‘Kiri’, but only a small (and highly effective) portion of the music recorded was used – intentionally sparingly – by director Euros Lyn. That first incarnation has since grown and morphed intosomething entirely of its own being; a proper artist album.

“In addition to my usual methods of controlled randomness and tangential ideas, the TV commission was a prominent spark for new approaches. It’s a great balancing contrast with the solipsistic studio album”, Clark explains.

The record allows simplicity and playfulness to shine through: “It’s a skeleton of an album, reduced to bare essentials, although it started out rather dense - the thing that takes time is making it succinct."explains Clark. “Certain parts are also what you could call anti muso – for example the recorder on ‘Kiri’s Glee’ is totally out of tune – but it sounds so colourful. I can’t resist the primary paint of acoustic instruments; it’s an antidote to frictionless digital music. 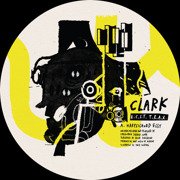