The first in a new collaborative series between Theo Parrish & Prime Direct Distribution unearthing some of Theo’s most sought-after edits, backed with the fully licensed original, both remastered and cut loud on either side of a 12 inch. Kicking things off we have one of Theo’s most treasured cuts, his ‘Ugly Edit’ of Made In USA - Never Gonna Let You Go, bootlegged endlessly in the past and racking up prices of up to £144 on Discogs it’s a high time an official reissue came around.

As iconic an edit as they get, ‘Never Gonna Let You Go’ encompasses everything great about Theo’s energy behind the decks - extending grooves for longer than anyone else even dare, working the EQ’s like a god and throwing in a bit of that raw magic that only he knows how. Taking the original’s sumptuous breakdown, Theo works it into a spirited, high energy disco workout looped into a near 10-minute stomper, big on the bass and brass fire whilst keeping the vocals to short and sweet snippets.

On the B side the original ’77 Made In USA version is laid out in all it’s glory. Funk powered, horn-laden disco goodness with breath-taking vocals from the Stateside troupe. 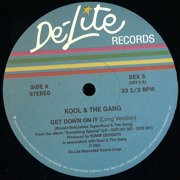 Get Down On It / Summer Madness