Limited white vinyl reissue....Chicago's Pastor T.L. Barrett has been known for more than four decades as an activist and pastor and for a certain scandal in the late '80s but most of all for gospel records "Like A Ship...(Without A Sail)" as well as this very album that gets a much needed reissue on the Gospel Roots label who have also brought us the likes of Roscoe Robinson and The Dixie Hummingbirds. Originally recorded at the Mount Zion Baptist Church of Universal Awareness, "Do Not Pass Me By" and seen on Miami's TK Disco offshoot. As a press release describes best it "is a real Gospel beauty and features eight tracks of resplendent hands in the air rejoicement.". Worth the price alone for ''I want To Be In Love''....The album comes with the original sleeve artwork and design. 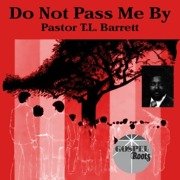 Do Not Pass Me By