Digging deep into the annals of Gospel now, the name Pastor TL Barrett should be familiar to the eagle eyed crate diggers amongst you. An extremely “colourful” character from Chicago’s Southside neighbourhood who found himself on the wrong side of the law for his involvement in some activities of a dubiously illegal nature, more importantly, besides this the pastor was widely known for his community activism and positive sermons preaching love and responsibility. Shady past aside, this fantastic 1976 LP entitled “Do Not Pass Me By” is a real Gospel beauty and features 8 tracks of resplendent hands in the air rejoicement. Having never been reissued before this rare as gem is finally back out in the open, complete with it’s incredible untampered with sleeve artwork and design. Barrett’s unique voice and message is timeless and instantly recognisable, you can’t help but become one of the congregation whilst listening to these wonderfully rousing and positive paeans to the lord almighty. Saying that, even if you find yourself to be a non-believer, the soul, funk and jazz stylings (with the odd flourish of synth!) the good pastor is laying down will be equally as alluring to those of you who dig those particular sounds. “Do Not Pass Me By” was originally released on Miami’s TK Disco offshoot Gospel Roots, it’s the Pastor’s second release on the label and is a beautiful snapshot of how things might have gone down at his “Mount Zion Baptist Church of Universal Awareness". A unique LP with with a somewhat lo-fi charm, the tracks contained run the gamut from slow, downtempo ballads to roof raising, danceable Disco-esque anthems. This is the first time that “Do Not Pass Me By” has been reissued on vinyl, fully remastered from Gospel Roots/TK’s original tapes, represented the way the the LP was issued in 1976 with all original cover and label artworks intact. Now, almost 40 years after it’s original release the album has now been made available again for 2016, fully licensed. 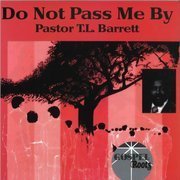 Do Not Pass Me By (white vinyl)