Following the reissue of the V-Neck EP Auto, Emote have sprung back to life with some lost DAT recordings of the band from the late 1990s.

These semi live recordings made at the Spike Studios in Fulham where a back to basics project and a deliberate move away, from computer programmed music.

The project was heavily influenced by the albums Drastic Season by African Head Charge and Get Up With It by Miles Davis. The tracks contain an array of random procession instruments ranging from African pianos to kitchen utensils, vintage synth tones and drones are provided by an Arp Odyssey and a Korg MS-20

By the time the delayed Dub Fiction album came out in 2000 the duo had decided to go their separate ways and the project was abandoned. 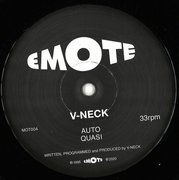