Continuing to deliver Sounds From The Void, XVI Records are proud to welcome London based Producer Delonte Rivers back to the label, with his brand new EP ‘Delonte In Dub’ Having previously released his ‘Midnight Congas’ EP back in 2018 (as well as a slew of edits and releases with Banana Hill, Love Above Recordings and more) Delonte now channels an elevated state of consciousness into a new dubbed out, subterranean sonic offering.

Returning with the galvanising track ‘Rise Again’, Delonte enlists the vocals of Sir Moon (also the voice of local hellraisers Muckspreader) giving a furious manifesto on the state of the union. Psyched out guitar stabs reverberate ripple across a turbulent sea of low end frequencies, as a rock-steady rhythm section holds the line. ‘Dub Again’ unsurprisingly strips back the original into a state of ethereal and reverb soaked hypnosis. ‘Cosmic Frequencies’ bring a cosmic slice of bass weight, whilst ‘One For Road’ injects a surreal, eerie atmosphere into the proceedings. This record is one for a hazed-summer in a strange dystopian world. 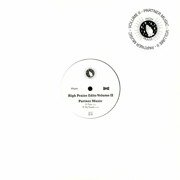