Limited Edition Vinyl LP (coloured red or white vinyl) A 1. Naulamatto , 2. Blue Ural , 3. Mysticum Magnum , 4. Kratera , 5. Koneen Sydän , 6. I was There B 1. Ghost Warrior , 2. Sähköinen Laji, 3. Sekava KEla , 4. Selvänäkijä, 5. Kollaasi , 6. Huumatun Pako Jimi Tenor has made an instrumental album “Mysterium Magnum” with the Finnish “national” Jazz Orchestra, UMO. UMO is a professional 16 piece orchestra. Specialized in jazz and contemporary rhythm music. Throughout it´s history UMO has had a focus on Finnish composers and has performed hundreds of compositions that were made especially for UMO. Jimi Tenor is a Finnish composer/performing artist maybe best known for his electronic music from the 90´s. This album is the first album that´s is composed entirely for a big band. In 2003 Jimi Tenor had his own big band and made a 6-week European tour, which included Montreux Jazz and North Sea Jazz Festivals. After 2003 Jimi Tenor has worked with an afrobeat group Kabukabu and made three albums with them: “Joystone” (2007, Sähkö), “4th Dimension” (2008, Sähkö) and “The Mystery of Aether” (2012, Kindred Spirits) In 2009 Jimi Tenor made an album with the afrobeat legend Tony Allen called “Information Inspiration” (2009, Strut) Mysterium Magnum was recorded at the rehearsal space of UMO, which is situated at the YLE studios in Helsinki. The music on “Mysterium Magnum” is not typical big band music. It varies from mystical contemporary compositions like “Koneen Sydän", “Huumatun Pako", “Mysticum Minus", “Sähköinen Laji. 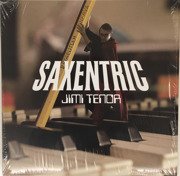